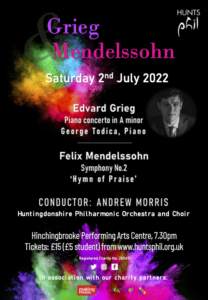 The Huntingdonshire Philharmonic has been at the heart of quality music-making in Huntingdonshire for over forty years. Founded in 1977 from the amalgamation of the existing Huntingdon Choral Society and Huntingdon Orchestral Society, it is one of the largest amateur musical bodies in the region.

Its first decades were directed by founding conductor Christopher Brown. During that time the Hunts Phil, as they are universally known, gave the first performance of a number of Chris’s choral and orchestral works. Notable early performances included Verdi Te Deum, broadcast on Radio Cambridgeshire, a semi-staged, full-costume performance of Sullivan Trial by Jury, and Elgar’s The Dream of Gerontius in Ely Cathedral, marking the fiftieth anniversary of Elgar’s death in 1984. During these years the Hunts Phil also performed further afield, including a tour to Salon-de-Provence in southern France, and worked with soloists including Bob Chilcott, Peter Cropper, Neil Jenkins, Hilary Summers, and Stephen Varcoe.

Today they perform six concerts each season, usually consisting of two choral concerts in St Mary’s Church, Godmanchester, usually accompanied by a chamber ensemble drawn primarily from the orchestra, and in the Hinchingbrooke Performing Arts Centre they give a mix of joint and purely orchestral concerts, including the ever-popular family Christmas matinée.

Our 2021/22 season is taking shape, as we return from many months away from live music-making and look to appoint a new orchestral conductor. Please take a look at the Programme tab on the left of the page to find full details.

Symphony No. 2 ‘Hymn of Praise’