Since we were founded in 1977 we have had at least ten regular conductors, but the longest serving was our founding Musical Director, Christopher Brown, who served from 1977 to 1991. Since then we have been served by David Lawrence, Ian Wilson, Eiron Bailey, Mark Robinson, Marcus Pashley, Madeleine Lovell, Richard Hull, and most recently Adrian Brown (2007-16) and Bjorn Bantock (2017-20). 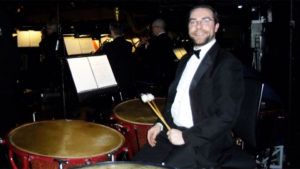 We will soon be advertising for our next Orchestral Conductor, but in the meantime we are most grateful to Chris Ridley, who has agreed to direct us in the interim as soon as we are able to meet again in person to rehearse. Chris studied percussion at the Royal Academy of Music and has been principal timpanist of the Gustav Mahler Jugend Orchestra, the Orchestra of Teatro La Scala, Milan, and most recently at the Royal Opera House, Covent Garden.