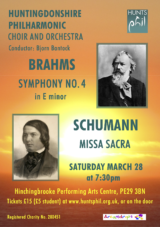 Lee Dunleavy, who has been Hunts Phil’s Chorus Master since 2015, is a dynamic conductor, organ recitalist and composer. He read Music at Hertford College in the University of Oxford, as Organ Scholar and later Director of Chapel Music. Whilst at Oxford he managed the University Orchestra, and was President of the Contemporary Music Group.

After working as Director of Music at Christ Church, Southgate, London, where he directed the choir in performances of works including Brahms’ Ein Deutsches Requiem, Handel’s Messiah and Monteverdi’s Vespers, he was awarded the Organ Scholarship at York Minster. He holds both the Choral Directing Diploma and the Fellowship of the Royal College of Organists and is a prize-winning holder of the Archbishops’ Certificate in Church Music.

From 2006 to 2014 Lee held the position of Director of Music at the prominent church of All Saints Northampton, leading the one hundred members of their separate choirs of boys, girls and men, in seven choral services each week. In 2007 he was appointed Musical Director of the Northampton Bach Choir. With these choirs he has commissioned over seventy new works, including compositions by Sir Richard Rodney Bennett, Stephen Cleobury, Jonathan Dove, Michael Finnissy, Stephen Hough, and James MacMillan. The choirs have also toured extensively, from Canada and the United States to Austria, Denmark, Germany, the Netherlands, Poland, and Italy.

Lee has also made a number of well-reviewed recordings, most recently Be Merry!, a joint recording of North American Christmas works with the Choirs of All Saints and the Northampton Bach Choir. With the Choirs of All Saints he also recorded Notre Père, Carol of Joy, and Omnes Sancti, and with the Northampton Bach Choir, I was Glad! and Congaudeat!

He is also an active composer and his studies at university led to the award of a Britten-Pears Scholarship to study with Judith Weir; this in turn led to the commissioning and performance of his first Piano Quintet at the Purcell Room at the South Bank Centre, London. He recently completed an arrangement of the National Anthem that was first performed in the presence of Her Majesty Queen Elizabeth II at the Foreign and Commonwealth Office, and church works recently performed in Bristol and Ely Cathedrals.